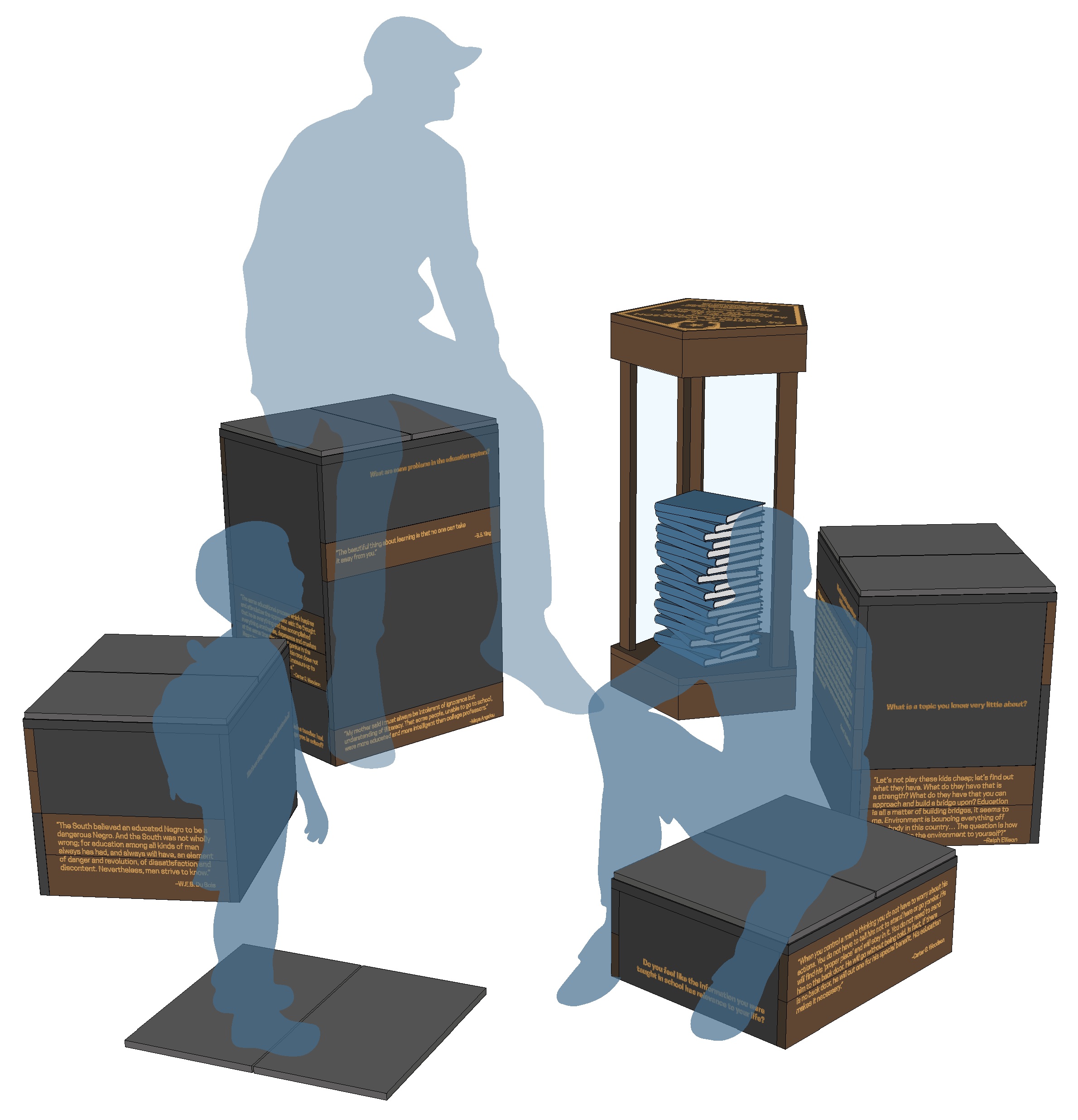 For an architectural studio, my class created a traveling exhibition for the noted Black historian: Carter G. Woodson.

Each student designed and built an individual exhibit within the larger exhibition. The viewer was directed through the exhibition consisting of three parts: a history of Carter G. Woodson's life, a summary of his major points and contributions, and a vision for the future of racial equality.

My exhibit fell in the middle section, acting as a bridge between Carter G. Woodson's contributions and their future implications.

I created a space for reflection, as well as the opportunity to read sections of Woodson's book The Miseducation of the Negro. My exhibit is titled "Seats of Power."

Carter G. Woodson is considered the Father of Black History, yet few know his name.

How do we educate the public and make his legacy relevant to our present-day lives?

Our traveling exhibit "Blue//Black" aims to educate on the life and legacy of Carter G. Woodson. This exhibition invites visitors to explore different narratives and experiences of Woodson’s life. By doing so, "Blue//Black" acts as a platform to bring to light the racial politics and inferiority complexes inset in our society today.

PART ONE | THE DESIGN

My individual exhibit highlights the importance of education as a means of empowerment. The visitor sees platforms that grow from stepping stones to a podium, underscoring that the growth of proper education frees Blacks from a system that enslaves and steps upon them to a system that empowers and enables them to advance and lead in society.

The visitor is invited to sit, read, and reflect on the words of Carter G. Woodson and other prominent Black leaders engraved on the sides of the boxes. Visitors are able to take sections of The Mis-Education of the Negro from the podium bookcase and read them. Lastly, the visitor is able to ask questions and share stories with other visitors in order to reflect on their own education.

I built my final construction primarily with poplar wood and slate. Both materials are local to Buckingham County, the birthplace of Carter G. Woodson. I replicated the memorial stone at Woodson's birthplace for the top of the podium. I divided Woodson's book into its 18 sections and reproduced them to live within my exhibit.

The full exhibit takes the visitors on a journey featuring three key sections.

Section 1 - Who was Carter G. Woodson?

Section 3 - What is Carter G. Woodson's relevance to the world today?